The German optical lens manufacturer is using Australian innovation to both improve the vision of myopia sufferers, and to slow the progression of the condition. 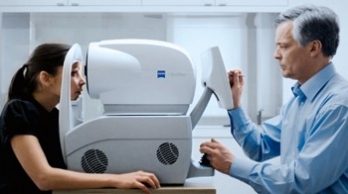 Almost a quarter of the world’s population suffers from the vision condition known as myopia. Commonly known as shortsightedness, people with myopia have blurred distance vision with generally good near vision, but in its more acute forms even near vision is affected. Myopia can be hereditary, and for young sufferers it can grow progressively worse as they age.

But one of the latest weapons in its arsenal against shortsightedness is the product of Australian ingenuity.

During the 2000s Carl Zeiss Vision had been developing lens technology that not only improves short-sightedness, but can also slow the progression of myopia in juvenile sufferers using a technique called peripheral correction.

This technology was also a focus for an Australian research group, the Vision Cooperative Research Centre (Vision CRC), and today the two organisations are working in partnership to bring the CRC’s patented MyoVision™ technology to market.

[pullquote align=”left”]CRCs provide multinationals with a unique and attractive proposition for developing technology for commercial output, while sharing the risks and the returns. The Australian Government has committed more than A$3.4 billion in funding to the CRC program to date, and there are currently 44 CRCs in operation across the mining, manufacturing, services and agricultural sectors.[/pullquote]

Founded in 2003, Vision CRC is a worldwide collaboration of leading vision care and eye health organisations based at the University of New South Wales in Sydney, Australia. It is part of the Australian Government’s CRC program, created in 1991 to foster innovation by forming long-term strategic links between publicly-funded researchers and industry to tackle major challenges, bring world-class research to commercial success and drive industry productivity. CRCs provide multinationals with a unique and attractive proposition for developing technology for commercial output, while sharing the risks and the returns. The Australian Government has committed more than A$3.4 billion in funding to the CRC program to date, and there are currently 44 CRCs in operation across the mining, manufacturing, services and agricultural sectors.

Myopia has been a key research field for Vision CRC. In a myopic eye, light rays from a distant object are focussed in front of the retina (the light sensitive layer at the back of the eye). This creates a blurred image on the retina.

The condition is corrected by a concave lens (for example, in a spectacle) that shifts the image to fall on the central retina. However, traditional concave lenses do not address the forming of the peripheral retinal image, resulting in the image falling behind the retina and a blurred image (a condition known as peripheral hyperopic shift). Key findings from research studies conducted by Vision CRC and its partners determined that blur at the peripheral retina can play a role in the progression of refractive errors.

The MyoVision™ technology created by Vision CRC and Carl Zeiss Vision not only enables the image to be placed on the central retina to provide clearer vision, but it also reduces the blur at the peripheral retina to help slow the progress of myopia.

In 2005 Vision CRC contacted Carl Zeiss Vision with the idea of collaborating on the development of new spectacle lenses using the MyoVision™ technology. The Vice President of Corporate Research and Development at Carl Zeiss Vision, Dr Markus Haidl, says his company had already released lens technology that could slow down the progression of myopia five years earlier, but was looking for fresh ideas.

“This new theory of controlling myopia progression by correcting peripheral hyperopic shift appeared to offer a promise to address our need,” Dr Haidl says. “Additionally, it fits with our demand to constantly find new solutions for our customers and provide a superior vision experience.

“Also, Australia has a vibrant research community in the area of myopia which is highly regarded around the world.”

Carl Zeiss Vision was attracted by Vision CRC’s global reputation for expertise in clinical research. Vision CRC had already established a partnership with the Zhongshan Ophthalmic Centre (ZOC) in Guangzhou, China, a country with one of the highest levels of myopia amongst children. It was an ideal location for clinical trials of the MyoVision™ technology.

“It is difficult to say if we would have been able to get the project even started if Vision CRC was not involved, and without its established relationship with ZOC,” said Dr Haidl. 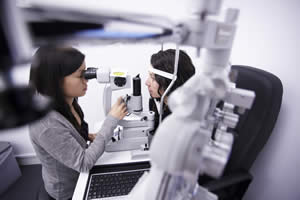 A new subsidiary of Carl Zeiss Vision was established in Adelaide in 2005 to service the Asia Pacific region. Adelaide is now home to one of two research and development facilities for the company globally.

It is also the headquarters for its Australian and New Zealand commercial organisation, and the location for facilities for the manufacturing of other Carl Zeiss products for the Australian market. Carl Zeiss Vision’s only other research and development facility is located at its headquarters in Aalen, Germany.

The first Carl Zeiss Vision lenses to feature the MyoVision™ technology went on sale in Singapore in 2010. They are now available throughout Asia, with the exception of Japan, as well as Canada and Australia, with further market rollouts planned.

The world in its sights

The head of the Myopia Program at Vision CRC, Assoc Prof Padmaja Sankaridurg, says that Vision CRC has made a significant contribution to Carl Zeiss Vision’s understanding of myopia, and the licensing deal has evolved into an ongoing relationship.

“In addition to the technology transfer, we are also working with their marketing team to help them translate the science to the optical practitioners,” Assoc Prof Sankaridurg says.

Dr Haidl says the partnership with Vision CRC is helping Carl Zeiss Vision to commercialise its products for a global market.

“We are working with key opinion leaders within Vision CRC to leverage the science and technology to support marketing claims and go-to-market strategies. The intellectual property created provides significant competitive advantages, which will be used to build recognition as an innovation leader in our industry.”

Carl Zeiss Vision has also benefited from tax concessions offered by the Australian Government designed to make research and development attractive in Australia, and Dr Haidl says the company has been impressed by Australia’s tertiary education system, which supplies a highly skilled workforce.

“Australia is good at attracting skilled labour from overseas due to its stable political system, high standard of living and attractive lifestyle. Australians are easy to deal with and are flexible in adopting change and in their approach to decision making. These qualities are highly appreciated.”